Music and travelling have always been synonymous. Let it going on a road trip with your friends to goa or spending time your partner at a couple friendly hotel in Mumbai, music always helps in setting the mood. Trips to the mountains and rock music have always gone hand in hand, from the early morning foggy car trips with a progressive rock to the quintessential hiking alternate rock playlist, one must take special care in curating a playlist before their trip to the hills. To make things easier, and help you you discover some new tunes in process, here is an ultimate playlist for your next mountain trip

Starting the list, comes Queen's 1975 magnum opus, Bohemian Rhapsody. If your friends don't sing along when this song comes on, you probably need new friends. Hailing from the golden days of rock, an era where Zeppelin, Black sabbath and Stones were performing, having a 6-minute song doesn't seem that obnoxious. But what made Bohemian Rhapsody special was it has consisted of 6 distinct part a ballad, guitar solo, hard rock part and most importantly an Opera part, in between the outro and intro, making it an experience like no other. One of the engaging songs to have on a playlist on your way to mountains or maybe renovate the mood after you have rested at a dayuse hotel on your journey.

Not having Floyd in a rock playlist kinda makes it incomplete, and the 1980's single Comfortably Numb is here to fill the void. There has been said almost everything about Floyd and this songs in most articles, but what makes this choice ideal is the perfect lyrics to sing along to follow by that blissful guitar solo by Gilmour to top it all of.

The 2003 hit by alt-rock band Audioslave, Like a Stone, just hits every string right. The song is about an old man, who wait for its death sitting at him home, after the death of his friends and family in hopes to reunite with them, as stated by Bassist Tim Commerford. For many, this song might be a bit hard to listen to, due to the unfortunate passing away of Chris Cornell in 2017. But don't be sad he went away, but be happy he was there and you witness his music.

Nostalgic anyone? The legendary intro is enough for everyone to get in the groove of this '88 classic by GnR. Slash, the band lead guitarist has been quoted as having an initial disdain for the song due to its roots as simply a "string skipping" exercise and a joke at the time. But everyone loves the classic nonetheless and is a perfect match for a match for most playlist any day of the week.

Progressive rock band, Porcupine Tree has been a rock fan go-to for many years, and the lead vocalist, Steven Wilsons's creative music writing had a lot to do with that. The almost 6-minute track, Trains is a perfect amalgamation of different elements of rock put together to create a beautiful sound that narrates Wilson's story of his nostalgia and childhood, as he grew up near a Train station.

Even if this track wasn't on the list, someone would play this anyway during your trip to the mountains, so rather put it here and get it done with. For the people who might have been living under a rock, this is the one of the most iconic of the last century, and the song tries to showcase the dark underbelly of the American dream and the excess in America by the use of the metaphor of a place called Hotel California.

A song by UK indie rock band, Arctic Monkeys, from their 2012 release AM. R U Mine? is your quintessential indie jam to have during your mountain. In the song, Alex turner, band lead draws inspiration from multiple sources of music and is a good song when your party is at peak during your mountain vacation.

For many, this was perhaps the first rock song they listened to, and lucky were all who go the opportunity to witness Chester Bennington. There is really no need to say much about the song, as most people already know the lyrics by heart, all you can do is smile while singing along to this classic from the 2000s, and take nostalgia to take over.

Calm down, to the music elitist's who are coming to say 'Wonderwall is so cliched' because while it is one of the most overplayed rock songs, I mean it is one of the most fun songs to sing along to and everyone knows it. Just because a song is popular doesn't necessarily mean it listening to it during a trip is sin. Now coming to the good parts, Wonderwall is just a good song which everyone will enjoy.

10. Welcome to the Black Parade, My Chemical Romance

The iconic lyrics from a legendary song by one of the most influential punk rock bands of the 2000s from their '06 album The Black Parade. My Chemical Romance or MCR was unlike any other punk band of the time and their music served as the voice for the voiceless, which led to them having a cult following. The album is the story of a patient who dies of early-stage cancer, and Welcome to the black parade being the first song of the album showcases death comes in the form of your most powerful memory, and for "The Patient" that memory is a parade he went to with his father, as explained by band lead Gerard Way.

Another of the classic by the late David Bowie, the alternative rock song is inspired by the film 2001: A Space Odyssey, the song talks about the journey of a fictional character major tom. The songs try to portray how a small step by a person in the space can mean a huge step for humanity. The slow start to the song with the soothing vocals of bowie, until the hooks come in makes the song to be a go-to choice for most rocks in their playlist.

If one had asked you what that pure indie rock music sounds like, make them listen to this song. From the 2016 album Teens of denial, lead Will Toledo has been able to create sound with a garage rock aesthetic. The song has a rawness to it, which Car sea headrest aced in balancing, as too raw of a sound might sound like bad production. The song touches upon the themes antagonistic, self-loathing relationship someone struggling with depression can develop, and the complicated relationships they can have with others, as a result, is just one of those songs you'd love to mildly headbang to.

If you have watched fight club, you're already aware of this classic by the US alternate rock group Pixies. The songs talk about the band lead Black Francis, talking about his struggles with drugs, which was making him lose his mind, and how a trip to the Caribbean changed it all for him. A classic in all rights, a perfect song to listen to with your close friends during your trip on the mountains.

The second Floyd entry to the list, Echoes is a special song. It is not exactly the most popular or well renowned from the Floyd discography, but the song of 23 minute run times is a unique experience. Okay before anyone a bit unfamiliar with Floyd thinks that's a typo, let me tell you it is certainly not and the song runs for 23:34 on the recorded version. The song takes the complete second half of the 1970 EP Meddle and is lengthy instrumental passages with sound effects and musical improvisation. The song is an introspection of being a human, and what are we as being done in the world, existing. A perfect song to play at the late drinking session at your 24 hour check-in hotel, during cold nights in the mountains.

The first single from the album 'Only by the night', by American alternate rock band Kings of Leon, Sex on fire is one of your quintessential song on most rocks playlist. The song was initially said to be named 'Set us on fire' as the song wasn't about sex, but when one of the mixers of the song walked into the studio, he mistaken it to be 'Sex on fire'. So the band decide to keep it as a running joke, which gave to the iconic song name it is today.

Mountain trips are truly special, while a trip to a couple friendly hotel in Delhi with your partner to unwind after a long week is nice, there is a certain serene in vibing to your favourite rock tunes while you make your way to the mountain in the embrace of mother nature. Don't forget to book yourself a 24-hour check-in hotel, so you don't have to worry about late check-ins. You can also opt for a hotel on an hourly basis on your trip to the mountains so you only pay for the time you stay.

Must read- 7 Essential Bengali Songs For Your Next Road Trip 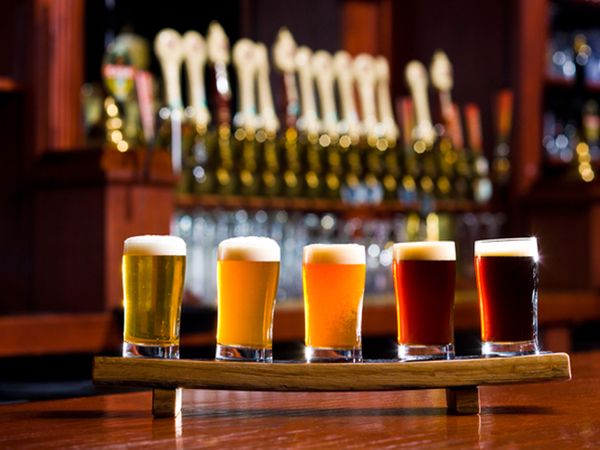 If there is one place famous for it's beer culture and breweries over the decade, it is Bangalore. Having one of the largest collection of brewpubs that make their own brews through out the city, makes Bangalore an exciting option for visitors to go on beerhoping.