Famously cited as the “paradise on earth”, Kashmir is the epitome of beauty, of natural marvels, of serenity and tranquillity, and of excellence and beauty.

Though it is also a hub to many controversial human rights violations on the locals, Kashmir still remains a vastly popular tourist destination. There is nothing which Kashmir doesn’t offer, from snow capped mountains to tulip gardens and lush greens all around.

Kashmir is suitable and vast enough to make multiple trips for, so if you have or have not been there yet this article still is for you. And if you want to make the most out of your time, consider booking day stay hotels so that you can gallivant from one site to another without losing on time all the while saving on your budget.

Srinagar is the largest city of Kashmir and also its summer capital (the winter capital being Jammu). You might already know Srinagar for its many houseboats and unique handicrafts, being nicknamed the Venice of the east.

Srinagar should definitely be your first stop in Kashmir, to experience its urban attractions before you move on to the more secluded ones. The dal lake is a major attraction here, known not only for its clear blue waters and shikaras but also for its floating vegetable market. It is also home to many more lakes, like the wular lake, one of the largest freshwater lakes of asia.

Since it is an urban city, there are many couple friendly and day stay hotels available here. Check them out on our website!

Literally translating to “the meadow of flowers”, Gulmarg is a quaint little town hill station situated on the Pil panjar ranges in the western Himalayas. It is a very popular skiing destination with many skiing resorts, and also offers tobogganing, snowboarding and heli-skiing. It is also situated in the boundaries of the gulmarg wildlife sanctuary. It has been called the ‘heartland of winter sports’ in india by the CNN and was rated 7th best skiing destination in Asia.

It is a very recommended location if you are into adventurous winter sports.

Also known as Sonamarg and Sonamarag, it literally means ‘path of gold’. It lives up to its name in winters when its lush green meadows are covered with white gold like snow.

It provides trekking routes to various lakes in the Himalayas like  Vishansar Lake, Krishansar Lake, Gangabal Lake and Gadsar Lake. It is also a base camp to Ladakh. There are also rafting tournaments organised here every year.

Located about 9 km from sonmarg is the zojila pass which is a very important link between Kashmir and ladakh. It has been the highest point to ever witness military tanks in the past wars.

It is located at the junction of the Aru and Sheshnag Rivers, with lush green fir covered mountains with pristine clear waters that is a very popular tourist destination. Every year thousands of tourists from around the world visit here.

Pahalgam is also the starting point of a sacred hindu pilgrimage, called the Amarnath yatra that happens every year in july and august. It is the jewel of the beautiful liddar valley.

Pahalgam also sees tourists which are looking for treks and shopping. It’s a must visit destination in Kashmir.

Anantnag is the third largest city in the union territory of jammu and Kashmir according to population size, therefore also being a popular tourist spot. Its name means ‘infinite water spring’ owing to the large number of natural springs in the city. There is also a huge water spring of the same name located in the center of the town.

Another important tourist attraction located in the city of Anantnag is the Martand Sun Temple, known for its archaeological excellence. It is a must visit site in Anantnag.

A little ways from Srinagar is the Pahalgam town, which is en route to the Amarnath cave temple.

The Amarnath cave temple is a popular religious and tourist destination and it is considered to be one of the holiest shrines in Hinduism, being one of the fifty one Shakti Peethas where body parts of the Hindu deity Sati fell.

It is covered in snow almost throughout the year and is open to pilgrims and tourists for a short while where it sees an abundance of people.

Mughal gardens is an umbrella term for a range of gardens located in Kashmir which were built by the Mughal emperors. A few of them are contenders for UNESCO world heritage sites.

These are located in the city of Srinagar and two in Anantnag. Those that are situated in Srinagar are the Chashma Shahi Garden, the Harwan Garden, the Badamwari Garden, the Indira Gandhi Tulip garden, the Shalimar Bagh, the Pari Mahal, the Nishat Bagh, the Naseem Bagh and finally the Jawaharlal Nehru Memorial Botanical Garden.

In Anantnagar are the Achabal garden and the Verinag Mughal Garden. All of these are home to rare, unique and beautiful varieties of flowers and lush greenery accompanied with soothing temperatures.

Ending the list with an underdog and offbeat Kashmir location we have Yusmarg or Yousmarg, which translates to ‘meadow of Jesus’. It offers two trekking trails, one to Nilnag which is a lake with pristine clear waters and the other to Sang-e-Safed, which is a lake that remains frozen even in summers.

The other activities that are offered here are horse riding, fishing, and skiing apart from photography. Due to its cut off nature from the rest of the world, it is a perfect place to disconnect and relax among the peaceful pine and fir trees and clear blue lakes. Yusmarg also sees many endemic species of plants as well as animals, including but not limited to bears, wolves, apes and various varieties of cats.

That ends our list of must visit locations in the Vale of Kashmir which give it its much earned name as the ‘paradise on Earth’. Book yourself a flight ticket and get ready to check in day stay hotels in Kashmir.

If you are here, you have probably already heard of this term. Destination weddings. It is all the craze nowadays, among the newly wed and those yet to marry, and especially amongst celebrities 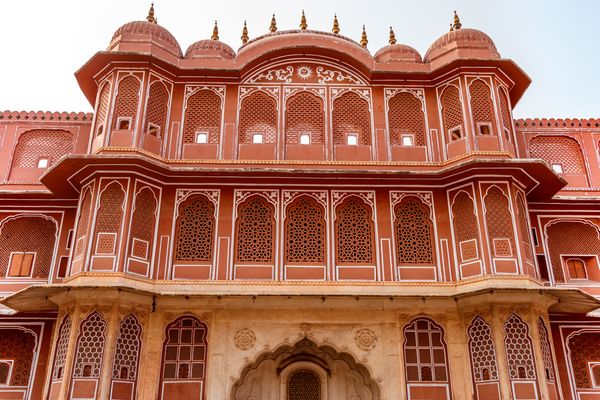 Jaipur is a vastly popular tourist city, so much so that almost every luxury train in India makes a stop at Jaipur to experience its rich cultural heritage. We talk more about Luxury