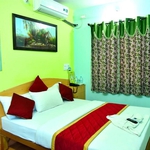 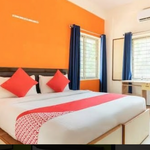 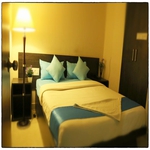 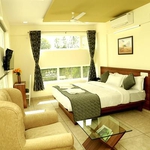 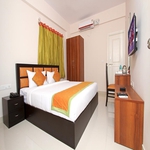 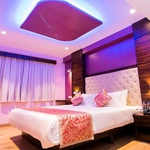 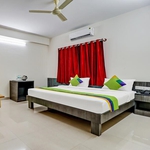 Kempegowda International Airport (IATA: BLR, ICAO: VOBL) is an international airport serving Bangalore, the capital of the Indian state of Karnataka. Spread over 4,000 acres (1,600 ha), it is located about 40 kilometres (25 mi) north of the city near the village of Devanahalli. It is owned and operated by Bangalore International Airport Limited (BIAL), a public-private consortium. The airport opened in May 2008 as an alternative to increased congestion at HAL Airport, the original primary commercial airport serving the city. It is named after Kempe Gowda I, the founder of Bangalore. Kempegowda International Airport became the Karnataka's first fully solar-powered airport developed by CleanMax Solar. As of 2016, Kempegowda Airport is the third-busiest airport by passenger traffic in the country, behind the airports in Delhi, Mumbai and is the 35th-busiest airport in Asia. It handled over 22.2 million passengers in 2016 with little less than 500 aircraft movements a day. The airport also handled about 314,060 tonnes (346,190 short tons) of cargo. By 2020, it is expected to handle at least 40 million passengers per year, with 45 international airlines and more than 1000 aircraft movements per day.

1. What are some of the budget and premium accommodation options in Bangalore?

2. What is the price range for hotels in Bangalore?

MiStay offers a wide array of hotels ranging from premium luxury properties to cheap, budget and pocket-friendly accommodation at hourly rates. In Bangalore we have hotels ranging from ₹319.00 to ₹7000.00. Please visit us at www.mistay.in to book a hotel that checks all your boxes

3. How many hotels in Bangalore are available for booking at MiStay?

In Bangalore, there are currently 282 that are available for booking at MiStay. They include hotels ranging from ₹319.00 to ₹7000.00

4. What are the popular hotels for unmarried couples in Bangalore?

In Bangalore, Treebo Trend Morgen Suites, Treebo Trend Crest, Treebo Trip Mel'S Regency, Treebo Trend Sri Udupi Park, Hyatt Centric MG Road are the top hotels for unmarried couples. MiStay provides 100% safe and secure couple-friendly hotels, but it is advised that the guest checks the hotel policy mentioned in the information about the hotel before going ahead with their booking

5. What are the hourly hotels available near Bangalore Airport?