Initiated by then-Vadodara king Maharaja Sayajirao Gaekwad III in 1890, the palace was completed after 12 years. The palace was named after the third wife of the king, Rani Laxmibai from Tanjore. Laxmi Vilas Palace showcases Indo-Saracenic style domes, arches & minarets in their architecture. The palace has built over a land of around 500 acres. The palace construction cost a whooping £180,000 (equivalent to 27 lacs) makes it one of the costliest palaces of its time! The Royal feel, right? Visit the spectacular palace & stay cost-effectively by booking a hotel for a few hours in Ahemdabad or an hourly hotel in Vadodara.

His Royal Highness (HRH) Samarjitsinh Gaekwad & his wife, Her Royal Highness (HRH) Radhikaraje Gaekwad are present residents of the magnificent palace. HRH Samarjitsinh is a descendant of Maharaja Sayajirao Gaekwad. The couple has two daughters. The Gaekwads ruled the city of Vadodara back in the old times. But still, locals hold the royal family of Vadodara in high esteem. As per the discretion of the royal family residents, various historic portions of the palace are open for public viewing. Sounds so interesting, right? Then, what are you waiting for? Plan your trip to Vadodara & save your bucks by staying in an hourly hotel in Ahemdabad.

The Architecture of the Palace

Major Charles Munt was the main architect behind the beauty of this marvelous palace. Quoted as one of the most impressive Rajput-era buildings, the architecture of the palace is a combination of the Hindu, Mughal & Gothic architectural forms. Elaborated interiors, decorated mosaics, charming chandeliers, and artworks describe the palace. You can admire paintings of famous artist Raja Ravi Varma & a collection of historic swords.

It's interesting to know that in the 19th century when India was still under British rule, facilities such as elevators & comprehensive interiors were in line for construction in the palace. In 1930, then HRH Pratapsinh built a large golf course for his European friends, which his grandson HRH Samrajitsinh opened for public view in 1990.

When you for a visit, the management authorities provide you with an audio player to listen for the palace tour. You can visit all the important locations of the palace with the help of that audio guide. Intriguing, right? Plan your visit to Vadodara & stay in a hotel for a few hours in Ahemdabad for your economical stay.

There are many fascinating facts that you must know about the luxurious Laxmi Vilas Palace.

A. The size is about four times more than Buckingham Palace! If you don't recall, Buckingham palace is the home of royals in London.

B. The architect of the palace hanged himself before the completion of construction! He feared that his design calculations were wrong. Little did he know his designs were so perfect. The palace has been still standing strong even after 127 years. After his death, the architect Robert Fellowes Chisholm assisted in completing the construction.

C. You can explore a historical landmark, Navlakhi stepwell near Laxmi Vilas Palace. Then kings spent nine lacs gold coins for the construction. These stepwells were named 'navlakhi' as nav is nine, and lakhi is gold in Hindi. Those stepwells were water resources for the areas of Gujarat.

D. This huge palace of 170 rooms was initially for two persons, the king of Vadodara & his wife!

E. There is a unique blend of both foreign & local artifacts inside the palace. You can appreciate Agra's red sandstone, Pune's blue stone, Rajasthan's marble, mosaic floor from Venice, and stained glass windows from Belgium.

F. 300 feet tower in the palace was initially constructed to be used as a clock tower. Soon, the idea got rejected after thinking that the ticking sound might create a nuisance for the residents. Instead, a lamp had been placed so that lighting up the same indicated the king's presence in the palace. Even today, the same practice has followed!

G. Not only the palace got a foreign architect, but British landscape architect William Goldring also designed the surrounding gardens. He was the same architect who designed the famous Kew Botanical Gardens in London.

Are you still thinking? Plan your holidays, book an hourly hotel in Ahmedabad or Vadodara & visit this fascinating palace.

The Laxmi Vilas Palace compound houses the banquets & conventions, Moti Baug Palace, the Maharaja Fateh Singh Museum, the Moti Baug Cricket Ground, a teak floored indoor tennis court and a badminton court. While the royal family of Vadodara still lives here, you have access to the following places as a visitor-

So, what are you waiting for? Book an hourly hotel in Ahemdabad or day use hotel in Vadodara for your stay & visit this awe-inspiring palace.

What can you do here?

Besides an audio tape-assisted tour, you can explore an ayurvedic massage center that offers remedial massages & ayurvedic treatments. You can relish the puppet show in the evening. Recreation rooms are available where you can play tennis, pool board & carrom games.

In the end, I just want to recommend you add Laxmi Vilas Palace of Vadodara to your bucket list. Located 111 kilometers from Ahmedabad, this grand palace attracts a huge crowd every day. So, when are you visiting? Book your room in an hourly hotel in Ahemdabad & take a tour of this luxurious palace. 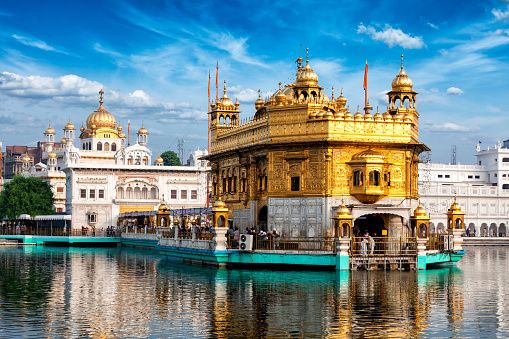 When you travel to the Golden Temple in Amritsar, you can experience the most memorable spiritual journey of your lifetime. You will not only learn to live in the present but they will

Christmas is near. Your pending annual leaves drive you to plan for winter vacations. So, why not visit these spectacular churches during Christmas week in the beach city of Goa?Portuguese ruled Goa

MiStay Travel Blog
—
Want Some Royal Treat? A 500 Acres Spectacular Laxmi Vilas Palace of Vadodara Is an Alluring Treat to Have!
Share this